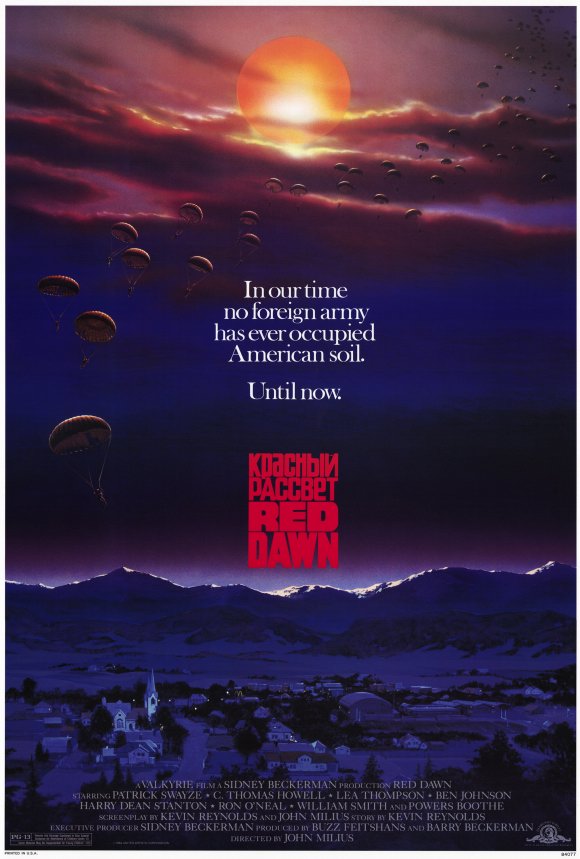 Actually very surprised by the tone of this movie.  Because of the cast and that it was released in the 80s I had the expectation that this was going to be a cheesy movie that only people who saw it as a child like it purely for nostalgic purposes.  But then I saw Milius’s name in the opening credits and after the opening scene I realized I was wrong.

Red Dawn takes place in Colorado at the start of World War III as Cuban and Soviet forces decide to invade the United States.  The opening scene of the film has paratroopers landing and attacking a school.  Some students get away and hide out in the woods but begin to realize they must fight back in order to survive and they become a guerrilla group known as the Wolverines.

The movie does not feature a broad scope look at the war, it never really leaves the Wolverines view point, there are no scenes of Presidents moving pieces around on a board or anything like that.  The characters are pretty thin, nothing really to hang on to, but I enjoyed the intensity and seriousness of the story.

Not an especially great movie but I dug the story and I was surprised at how not “80s” it was.  Studios really like to remake already great movies but this is the kind of movie that seems like it should be remade, an interesting story but just not totally there in terms of quality.  I know MGM did remake this a few years ago but because of their bankruptcy issues it sits on a shelf in limbo.  Hopefully they get it sorted out and released soon as I am now more interested in it.  The same thing happened to The Cabin in the Woods (also a casualty of the MGM bankruptcy) before it was picked up by Lionsgate after having been done for years so hopefully we will see it soon.