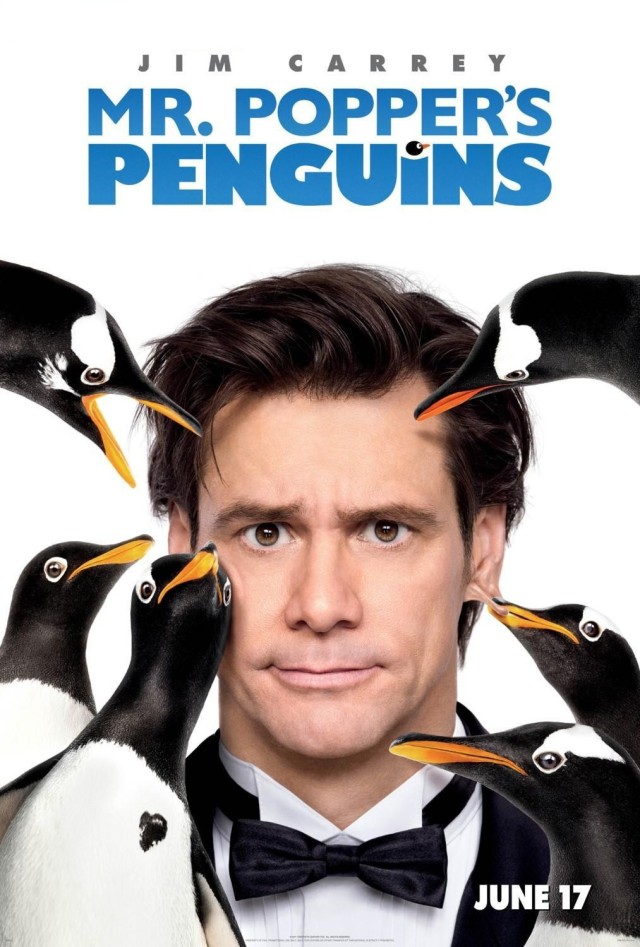 (Based on the novel by Richard Atwater and Florence Atwater)

Carrey works too much but his kids like the penguins that Carrey’s dad who he never knew sent to him before he died.  Instead of sending the penguins to people who take care of penguins he does the sensible thing and keeps them and shovels snow into his apartment and makes it into a penguin sanctuary.  Everyone thinks he is losing his mind, he is close to losing his job and his home but at least it makes his kids happy when they come over!  Do the kids even really like him now?  Or do they just like coming over the play with penguins?  Who cares!  Penguins!

I guess I am instilling too much thought into a cute kids movie.  This was fine for what it is, a by the numbers divorced bad dad kids movie.  Seems that most family movies these days follow this formula.  Parents are divorced, the dad works too much, he ends up doing something insane to please his children and then through this crazy thing realizes how important his family is awwwwww.  Sometimes the divorced parents get back together but at least by the end they are friends with each other again.

Carrey plays a slick real estate guy in New York City.  He didn’t know his dad who was always off doing things on his own.  Flash forward to decades later Carrey is divorced with two kids but is very successful.  He gets a box in the mail.  His dad died but to make up for it he sent him a bunch of penguins.  Because that is how you make up for abandoning your family.  Clearly his dad had dementia before his death because he knew his son was living in a New York City apartment because he had to address the box in order for him to receive it and what the hell is someone in NYC going to do with a bunch of penguins.  How long were the penguins in the box without food?  It was certainly a long trip from Antarctica to NYC so they must have been hungry!

Penguins are cute though! 🙂