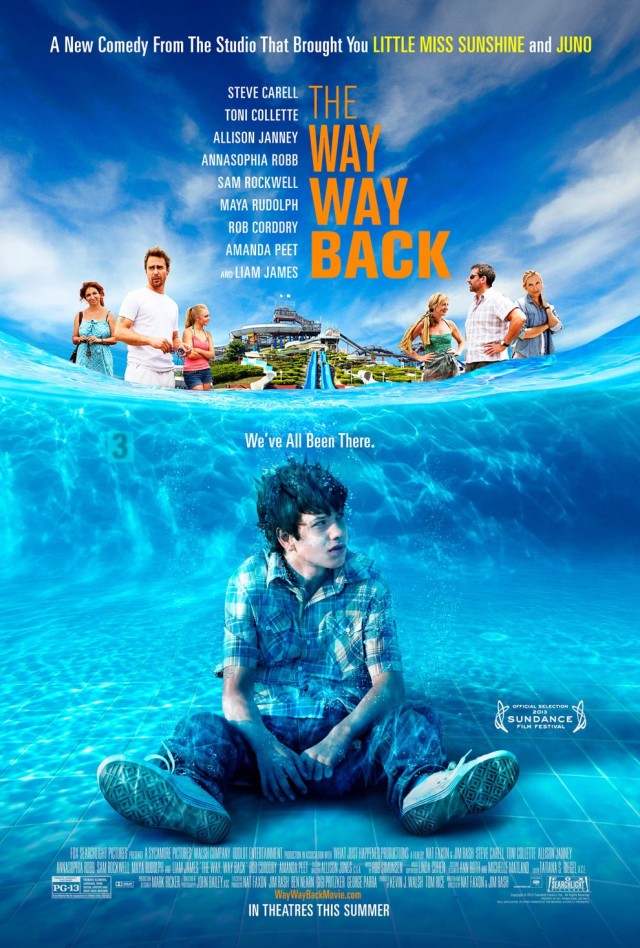 If there has ever been a more uncomfortable looking teenage boy on screen than Duncan I have yet to meet him.  From the opening scene, where the sullen faced and shaggy haired teen hides in the back of a station wagon, it is clear that Duncan is just not having a good time.  At all.  He is being forced to spend his summer vacation with his Mom, Trent, his Mom’s boyfriend, and Trent’s teenage daughter at Trent’s beach house.  While the women in the car sleep Trent asks Duncan how he would rate himself on a scale from 1 to 10.  After much hesitation Duncan guesses a 6 to which Trent informs him that he thinks Duncan is more of a 3.  Of course this is a great way to kick off a summer vacation.

The Way Way Back surprised me in that it is a lower budget coming of age movie from the Fox Searchlight distribution arm of Fox but it isn’t filled with bizarrely cutesy, quirky, and un-relatable characters that tend to populate films like this.  Co-Directors and writers Nat Faxon and Jim Rash, who both won Academy Awards last year for their work on The Descendents screenplay, ground the story in a believable and yet still fun and bittersweet world.  While the first act of the film reminds us just how awkward growing up is, and as the movie demonstrates this is something we are doing constantly throughout our whole lives and not just in our adolescence, it doesn’t dwell on the negative and instead shows how wonderful things that can come out of that pain and fear.

Supported with a strong screenplay the beyond solid cast is what really shines.  Liam James anchors the movie well as Duncan, the slouchiest kid who ever slouched on the big screen.  His Dad has left him and his Mom Pam, played by the ever reliable Toni Collette, is dating a new man named Trent who couldn’t be further from Duncan in terms of personality.  Trent is a tanned and buff alpha male Dad type, also divorced and with a teenager on his hands, and in a surprise casting is played by Steve Carell, usually seen as an aloof and likeable klutz.  Carell’s role is a non-comedic one and he turns in a good supporting performance that makes me curious to see him in more dramatic work.

One of the stand out roles in my mind belongs to Allison Janney as Betty, their next door neighbor.  Janney enters the film like a bulldozer and is rarely seen on screen without a cocktail in hand and her mouth flapping away.  She is the kind of woman you just can’t get away from no matter how hard you try but never really dislike because her heart always seems to be in the right place, no matter how crass she seems.

Sam Rockwell, with his mischievous smile, is perfectly cast as Owen the manager of Water Wizz the local water park.  Owen takes Duncan under his wing and gives him his first job.  Owen is a carefree bullshitter skating by in life, cracking jokes, and not taking anything seriously.  This type of person would of course be appealing to a fatherless fourteen year old but Owen has his own coming of age story through the film that really gives Rockwell a lot of room to show his great range as an actor, easily transitioning between the comedic and dramatic tones of the film without ever making it jarring.

The Way Way Back succeeds on the strength of its cast and relatable characters.  Awkward coming of age stories aren’t anything new but the film has an authentic feel and heart to spare.  The goals of the movie may not be the loftiest but sometimes watching, waiting, and hoping for a weird fourteen year old to get his first kiss from the girl next door feels like it has more at stake than any summer blockbuster.