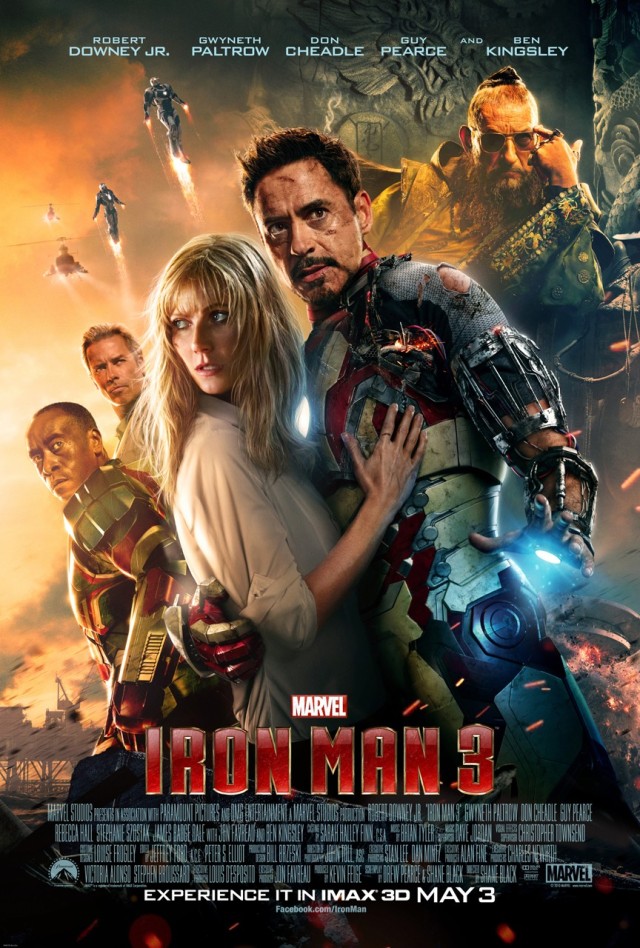 The best thing Marvel did was hire Shane Black and let him do his thing.  Black was MIA for many years but came back with the stellar Kiss Kiss Bang Bang a few years back and it seemed clear that him and Downey were a match made in heaven.

Downey was pretty perfectly cast as Stark years ago but I have to admit that going into his fourth outing in the role I was feeling fatigue, not only with the Iron Man franchise but with Downey’s whole thing.  Between Marvel and the Sherlock Holmes stuff he seemed to be taking the goodwill he had built up in recent years and was turning it into a Johnny Depp annoy-a-thon, just throw on some wigs and do some funny voices for soulless forgettable big budget movies.

After the mess that was Iron Man 2, and thinking The Avengers was OK, I felt like I was seeing it more out of obligation than excitement, I waited two weeks to even go.  What a surprise it turned out to be!

One of the big problems with 2 was that it all just felt like setup for The Avengers.  It seems they learned their lesson and while the events of The Avengers clearly had an effect on the world of Iron Man 3 and they are referenced this is really just a self contained Iron Man story.  No S.H.I.E.L.D. nonsense.

The best thing about this movie is just how fun it was.  Since The Dark Knight there was a real emphasis on silly things being taken very seriously, as if that was the mark of quality.  Then Marvel started to do their thing, and it worked, and the Iron Man series has so far had a perfect tone for the material.

There is certainly some great and inventive action scenes, but those things can only get you so far if you don’t have a story and the character moments.  Even Stark being stranded with a rag tag smart ass little kid, which sounds AWFUL, is a highlight of the movie because of the writing and how Downey plays it.

There are some pretty funny and surprising third act twists that I  didn’t see coming, mainly because these Marvel movies have so far been very straight forward, that just made it that much better.

I don’t want then to over do it on a clearly good thing but Iron Man 3 is a helluva great step in the right direction for these post Iron Man Marvel movies.  At this point it would be hard to see why they wouldn’t want to try and bring Black back.  It seems they learned from the mistakes of the past and instead of relying on the character to sell tickets, which they could easily do at this point, they handed the reigns over to someone with a very distinct voice and didn’t stifle it.  After all if you’re gonna hire Shane Black you should let him be Shane Black.  Voice over in a series that hadn’t previously had voice over?  OK.  Big Summer movie set at Christmas time?  Why not.

As someone who sees all the superhero movies and has read a lot of comic books over the years I was feeling a little over the whole comic book/superhero thing.  This Summer alone we have Iron Man, Superman, Wolverine, Kick Ass 2, Red 2, and RIPD.  But Iron Man 3 got me excited in a way I haven’t by a lot of these movies so far.