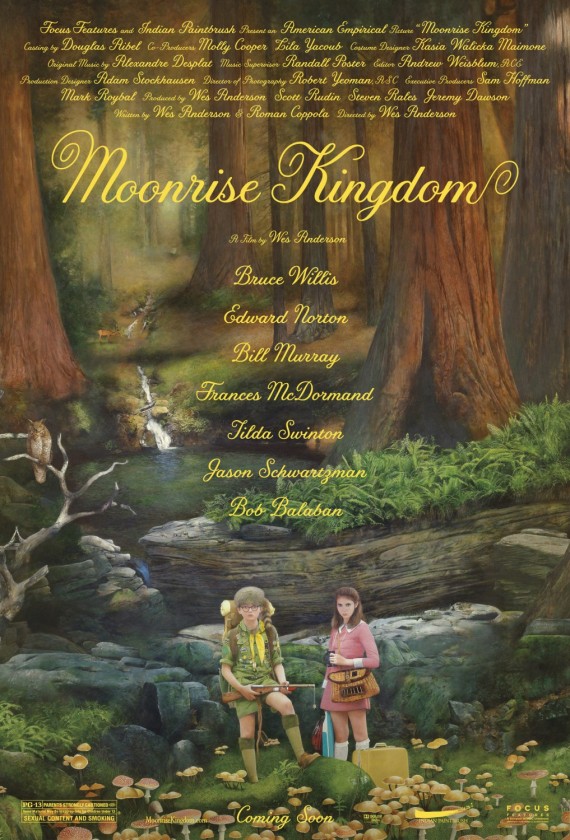 “Moonrise Kingdom” is the wonderful new movie from Wes Anderson.  It is unmistakably his in all of its bizarre melancholy humor, intricately designed sets, and fantastic use of music.  It is one of his best and certainly one of the best films over all so far this year.

Set in 1965, Anderson’s first actual period piece, the movie stars two adolescents who conspire to run away and live in the woods together, if only for a few days.  The boy is Sam (Jared Gilman), a restless orphan who is in the Khaki scouts, camping out and learning survival techniques.  The girl is Suzy (Kara Hayward), think of a younger Margot Tenenenbaum and you get the idea.  The two met the previous summer and became pen pals and in typical Anderson fashion we see all of their correspondence in extreme close ups.  Despite all of the major talent in the movie these kids are most certainly the leads and if they did not work then the whole movie wouldn’t.  There is a certain bizarre charm to them and they fit amazingly well in Anderson’s very mannered and designed universe.

The rest of the cast is absolutely stellar.  It wouldn’t be a Wes Anderson movie without Bill Murray who plays Suzy’s sad sack father Mr. Bishop.  Murray has always been great but I particularly like this late career more solemn type of comedy he has been into.  He is married to Mrs. Bishop, who is played by Frances McDormand, constantly running around with a megaphone barking orders at people.  Bruce Willis plays Captain Sharp who seems to be the only police officer (even in a Wes Anderson movie he HAS to play a cop) on the entire island.  Edward Norton is Scout Master Ward, giving a much more sensitive and sweet performance than we are really used to.  Rounding out the cast are Jason Schwartzman, Tilda Swinton, Harvey Keitel, and Bob Balaban as a Narrator who pops up every now and again to break the fourth wall but is also apart of the story itself.

What struck me most about this movie is just how funny and cute it is.  I felt that with “The Life Aquatic with Steve Zissou” and  “The Darjeeling Limited”, two movies I did like but are probably his weakest, Anderson was falling into a more cynical and mean spirited type of humor but after “Fantastic Mr. Fox” and “Moonrise Kingdom” it seems like he has found a new groove.  Movies really can’t get much more delightful than this.  Anderson writes his characters in a way where no one is ever trying to be funny.  No one really smiles or is cracking jokes; in fact this is all very serious, which makes it all the more hilarious.  When a character has a thought it isn’t really a deep dark secret like a normal person would have, the just say it.  It is that “heart of a sleeve” style that I enjoyed so much.

Wes Anderson movies always feel like fairy tales so filtering that style through the eyes of children makes so much sense now.  As with his last film, the animated “Fantastic Mr, Fox”, it feels like it must have been an A-HA moment to center the story on blossoming young love.  The movie is sweet, funny, and has style to spare.  If there is a better comedy or more poignant movie this year I will be pleasantly surprised.  Don’t miss it.