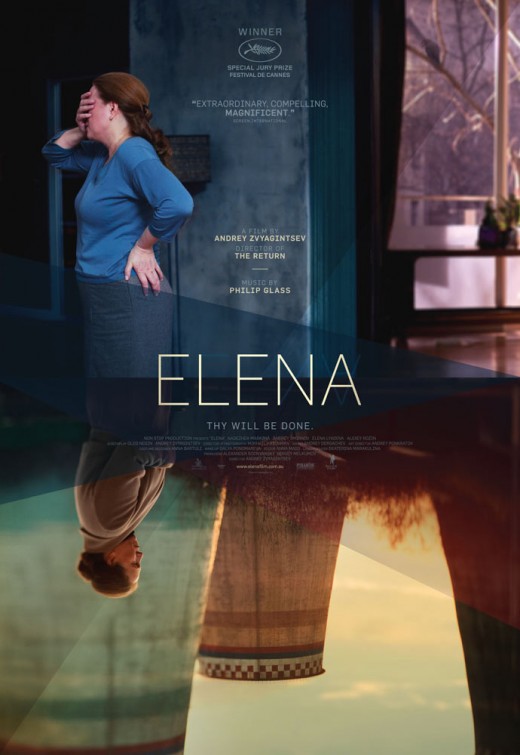 Elena is a different kind of thriller than you might be used to.  It isn’t playing at your local multiplex, in fact as of writing this it is only playing in 7 theatres in the country, but is worth seeking out if you like your drama a little meaty and not particularly spelled out for you how exactly how you are supposed to feel.  I saw this movie about a week ago and on my walk home I wasn’t quite sure how I felt about it.  It was a kind of frustrating experience and one I didn’t totally feel comfortable reviewing right away.  So I thought about it for a while and after a few false starts I started to write and what I discovered through writing about it was a movie that I had much more respect for and admired more than I had originally thought.

Nadezhda Markina plays the titular Elena, a widowed nurse who took fell in love Vladimir, played by Andrey Smirnov, a patient she was taking care of.  The movie takes place in the present after they have been married for about a dozen years.  Elena is from a different world than Vladimir.  Though she is his wife she still has the caretaker mentality.  She wakes up, cleans, makes breakfast, and then wakes up Vladimir as if he is still her patient.  These long scenes, coupled with the long scenes of Elena traveling to the slums to visit her Son and his family, really drive home the duality of how she is living. These scenes also do a great job of setting up a lot of the characters personalities without doing any kind of voice over explanation like might be present in a more mainstream American movie.  Just through their actions we get what kinds of people we are dealing with, the sure sign of great directing.  Filmmaker Andrei Zvyagintsev has crafted a very real world type of thriller that spends as much time setting up characters and situations as he does with the actual thriller part so that when the last act rolls around you are much more invested in characters and the moral questions that are being raised than you would be other wise.

Elena is set in the gloomy, and seemingly always wet, Russia.  Elena’s son can’t support his own family and is constantly asking her for money.  Vladimir is sick of it and refuses to help Elena’s son and his family.  Because of this Elena’s grandson will be forced to join the military.  After a heart attack Vladimir’s own daughter comes out of the woodwork.  The two have a strained relationship but after looking death in the eyes Vladimir comes to a realization that when he dies his estranged daughter will be the sole heir to his fortune forcing Elena to choose between her life as a meek housewife or going forth with a desperate plan to help her son.

Nadezhda Markina turns in a fantastic and naturalistic performance as Elena.  Everything we need to know about her we can just see in her face.  There are no tricks going on here.  There directing is confident and that can especially be seen in the performances, and especially the lead.  Famed composer Philip Glass also turns in a rather hypnotic score that does not over power the film but rather supports it the way great scores should.

Looking back at this review now that it is done nothing has surprised me more than what I wrote which is a good review.  I remember being so confused as to why Elena had received such glowing praise from critics and won the Special Jury Prize at the Cannes Film Festival last year.  All I saw was a story that I felt like I had seen in countless other thrillers, except this time it was set in Russia and with a lot of scenes of people not doing anything “important”.  But in thinking about it I realized it was all important in terms of shaping the world and of course the characters.  Elena is a smart and thoughtful film that presents realistic characters in a realistic and harsh situation but doesn’t force you to pick a side.  If you are looking for a smart, stylish, and different kind of thriller Elena is one to check out.

Side Note!  I really like the poster for this.  More so than the drawn one that Sam Smith did.  I do like Smith’s work in general though.  I have a few of his things hanging in my apartment.  Thats all!