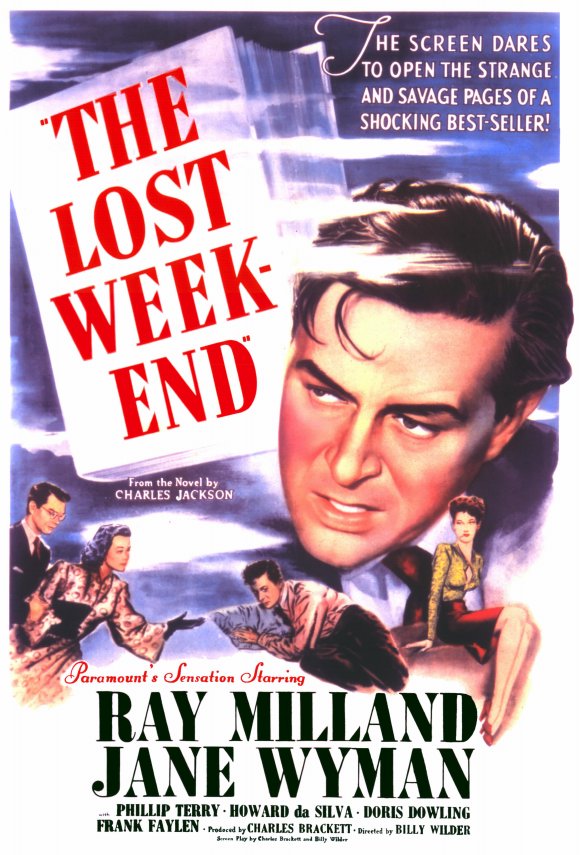 (Based on a novel by Charles R. Jackson)

Academy Award winner for Best Picture in 1946 as well as Best Actor, Director, and Screenplay.  It follows Don Birnam, played by Ray Milland, an alcoholic writer who goes on a four day drinking binge.  Considered to be very controversial upon its release for its frank portrayal of alcohol abuse.  Up until then drunks had been shown to be the find of funny town color, they roam around with their bottles in paper bags and say funny things.  But here it is shown to be a pretty horrible thing to have to deal with.  Even almost 70 years later the film still has the same effect.  Great screenplay by Charles Brackett and the legendary Billy Wilder.

My name is Jon and I live in New Jersey. These are the movies I have watched since January 1, 2011.
View all posts by Jon Watches Movies →
This entry was posted in Drama, Uncategorized and tagged 1945, Academy Awards, adaptation, alcoholic, alcoholism, best picture, billy wilder, binge, charles brackett, charles r. jackson, don birnam, drama, ray milland, the lost weekend. Bookmark the permalink.