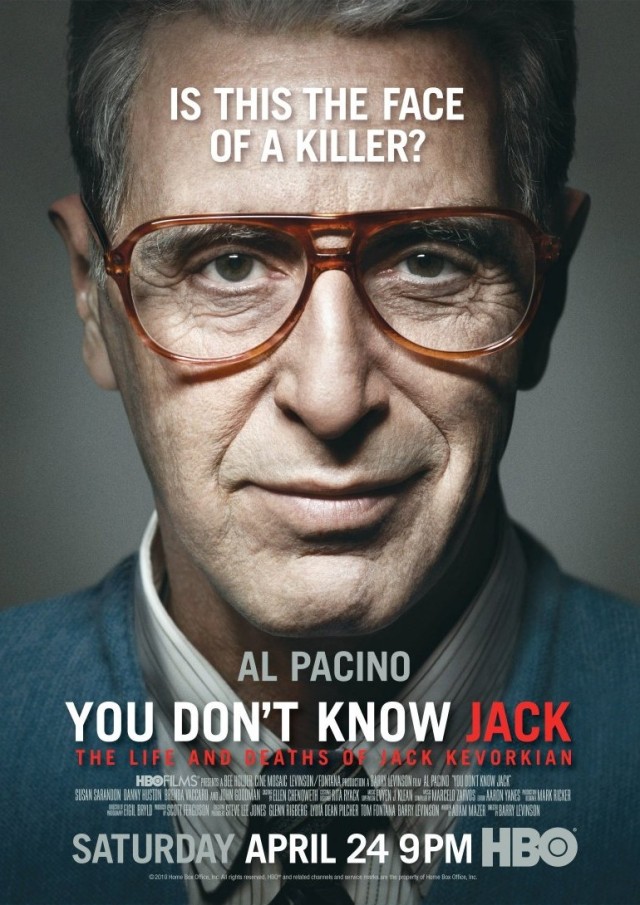 I still hate the title of this movie.  I hated it when I first heard it and after watching it I still hate it.  For such a tense topic it is just way too goofy.  If this was what they went with I would have liked to hear some of the rejects.

ANYWAY!  Pacino has been sleep walking through his big screen movies for the last decade or so and I thought he turned in a really good performance in this movie, better than most of the stuff he has done recently.  The accent was off, I didn’t even know what it was supposed to be until I read more about it after I watched the movie, but that didn’t really hold back from my enjoyment of it overall.

The story is pretty clinical I thought.  It starts with Kevorkian beginning his work in the world of euthanasia.  He looks at things from a more clinical and scientific mind but he received lots of push back from people who found his work morally offensive.  The movie just covers the time period in which he assisted in 130 people’s suicides.  It didn’t show his whole life or in my mind attempt to explain why he wanted to do what he did beyond he felt it was right and he wanted to push boundaries.

The movie is competently made, not slick or stylized, and pretty much rests on Pacino’s performance.  The scenes in which they show the footage of the people Kevorkian assisted in their suicides looked like actual footage, not of actors re-creating scenes, but with Pacino’s voice talking to them off camera instead of the real Kevorkian.  I don’t know if this is true but that was the impression I got.  I thought this was a really interesting way to convey the thought process behind what he was doing.  I could sit aside and say what is or isn’t right about it without ever having seen the people and what they were going through or thinking so showing, what seem to be real, footage of the actual patients really made me think more about what I was seeing and just the reality of the whole situation.

An interesting guy and an interesting story.  I didn’t find it to really have a ton of depth in it though.  Pacino’s performance is compelling enough to give it a watch.