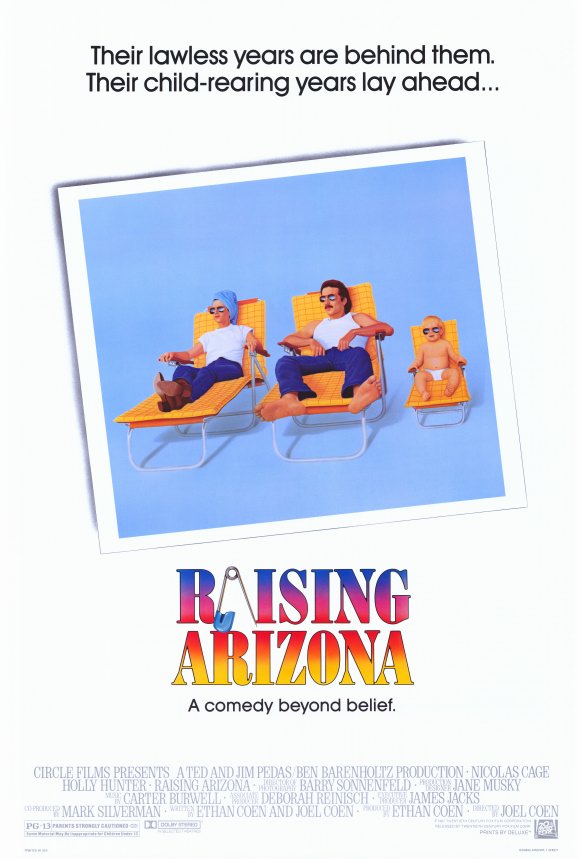 Definitely a comedy classic.  I can’t say how much I love and appreciate the Coen Brothers.  I also love Nicolas Cage.  I know he gets a lot of crap for the 7 bad movies a year he is in but at the same time I do think he is one of the great living wacko actors and I love how he has somehow become a mainstream household name.

The Coen Brothers seem to divide their time between making dark violent crime capers and then slapstick comedies about dumb people doing dumb things.  This one falls into the latter category.  Cage plays H.I. McDunnough (where do they come up with these names?!) a recently released convict who falls for police office Edwina (Hunter).  The two really want a baby but are unable to conceive so they do what anyone would do: kidnap a baby from a furniture store big shot and claim it as their own.

For me I just love the way the Coen’s write.  There are a lot of writers and directors and writer/directors etc but there aren’t many that without credits you could pick out who did what and the Coens just have a very distinct look, sound, and feel.  The fact that this was the movie they did to follow up Blood Simple, seemingly the total opposite, just shows what kind of Hollywood outsider risk takers the guys are.  I like that despite being true originals they are able to actually do so.  There is a lot of crap in the movie system and it is comforting known that good stuff can still get through.