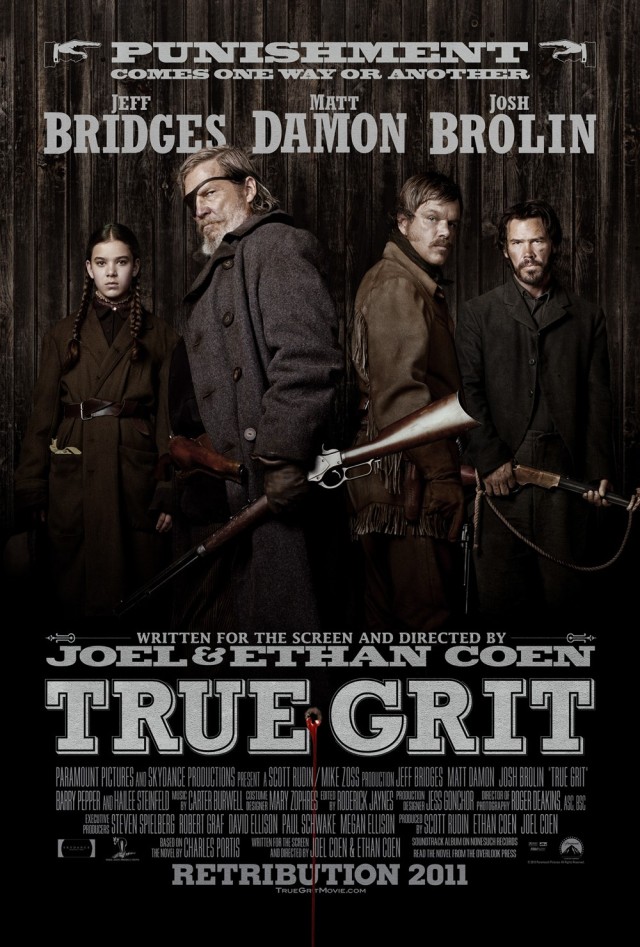 (Based on the novel by Charles Portis)

I don’t know why I was surprised at how much I laughed during this movie.  I guess it was my expectation that this was a Western.  But it is a Coen Brothers Western and that can not be mistaken after seeing the movie.  From the wonderfully quirky cast, the fast and witty dialogue, to the beautiful Roger Deakins cinematography this is definitely a work of the masters.  I am a huge fan and this definitely did not disappoint.

Bridges continues his current run of drunk bum type characters, always growling and snarling at people, and not always intelligibly.  Newcomer Hailee Steinfeld despite being 14 years old holds her own on screen against some of the best actors working today.  Matt Damon, an actor I find it impossible to dislike, gives one of his best and funniest performances, lead or supporting, that I can recall as Texas Ranger LaBoeuf.

The movie is not an action film, despite being marketed as such, which leaves more room for the Coen’s hilarious and strange dialogue.  It requires attention and it truly made me laugh in some parts more than any mainstream comedy I saw in 2010.

Yes it is a remake or adaptation or whatever but this is definitely a Coen film.  They do what all great adaptations do which is take someone and make it their own while still staying true to the source.  They did it once before with No Country For Old Men, a movie I love more with every viewing, and they have done it again here.

Started off the year with True Grit.  Fantastic on just about every level.  Great cast.  Not a weak link.  But I’m a Coen Brothers fanatic so this was all to be expected.  I really hope they continue this making a movie a year business.  Can’t get enough.